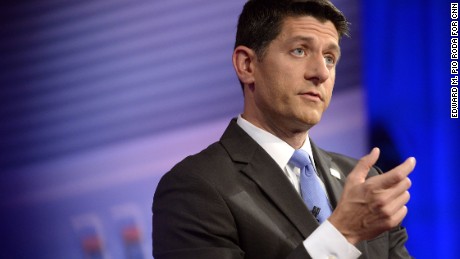 The House Speaker stressed Wednesday that preparation was important in his 2012 debate against Vice President Joe Biden and said he benefited from mock debate sessions.

Ryan was asked by moderator David Rubenstein at the Washington Economic Club if he prepped for his own debate and Ryan laughed, saying he knew where the conversation was heading.

Ryan said he emerged the better from the preparation and he described mock debate sessions with Ted Olson, a renowned Supreme Court lawyer, playing Biden. Ryan said he was amazed how much Olson as a stand-in was able to replicate Biden’s mannerisms.

In an interview on Face the Nation ahead of the debate, Ryan said his advice to Trump would be to “over prepare” and he added, “I hope he’s doing this.”

After Trump’s uneven performance in the first presidential debate Monday night, Republicans are acknowledging that the billionaire businessman’s lack of practice hurt him.

The speaker also described the presidential contest as close and likely to stay that way.

“I think the debate basically froze the playing field, I don’t think it changed the dynamic in this race too much,” Ryan said. “This thing is going into being basically a tossup.”

The Wisconsin Republican took himself out of the 2016 presidential campaign season, citing his focus on policy issues in the House and his young family. But he left the door open to a potential bid in 2020, saying, “You never say never to these things.”

Ryan also maintained that he never really had the ambition for the office itself.

But when pressed that in 25 years he will be the same age as Trump and could still run, Ryan responded, “Who knows?”

Looking back on his 2012 campaign on the GOP ticket, Ryan said his biggest regret was not laying out a more detailed plan for what he and Mitt Romney would do on a wide range of issues.

Without mentioning Trump’s name, the speaker seemed to criticize the 2016 contest’s focus on personality over policy. He said after his own experience on the national stage that he believed Republicans needed “to have a more coherent specific agenda so that people can sink their teeth into it so that they know they are not just voting for a personality, but they are voting for a cause, an agenda, a solution.”