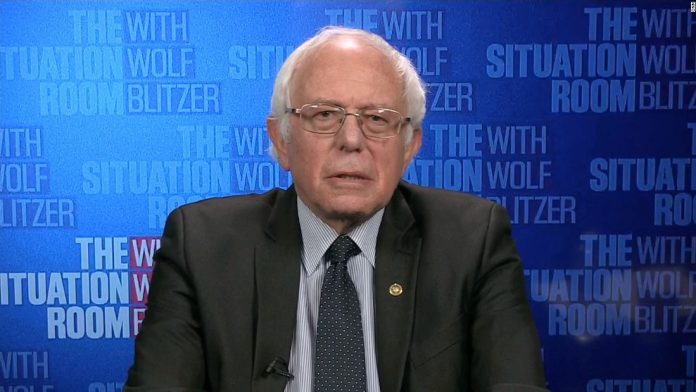 But Clinton’s chief rival for the Democratic nomination was in no mood to question Clinton’s campaign or whether he himself could have fared better in a general election. Asked by CNN’s Wolf Blitzer whether he would’ve brought Democrats to the White House, Sanders smiled before bellowing.

“What good does it do now?” Sanders said. “I don’t think it makes a whole lot of sense to do Monday-morning-quarterbacking right now. The election is over. Donald Trump won.”

Sanders said he felt Clinton was likely to win, but acknowledged that Trump had made a connection with working-class voters that kept him competitive.

He said he had not yet phoned Clinton to discuss the race, and acknowledged, “I owe her a call.”

He promised to work with Trump on several issues that unite them — a more protectionist trade policy, fixing America’s tax code and enacting campaign-finance reform. Sanders said Americans upset with Trump’s election have a right to be angry, but called for that anger to be channeled in a positive way.

“I hope that on those areas where Trump talked about the needs — where he was right, the middle class is hurting — let’s work together to improve lives for millions of people who are living in despair and who have the right to do better than they are today,” Sanders said. “Trump talked about his concerns about outsourcing, about a bad trade policy. If he is serious about reforming our trade policies and creating jobs, let us work with him.”

The Democratic presidential nominee also declined to rule out even discussing a 2020 bid, saying voters are tired from the last campaign and are no longer interested in diving back into the electoral process.

“The last thing in this world in this never-ending campaign we have not even sworn in this president is to talk about 2020,” Sanders said. “Let’s not go there at all.”

He spent 27 years in prison for murdering two children. Now a Chinese court has found him not guilty

Trump still not grasping the severity of the pandemic, source tells CNN

Sports Gerald Ravindran - August 6, 2020
0
As the world of sports tries to deal with the aftermath of the COVID-19 crisis and the racial reckoning at the same time, the...