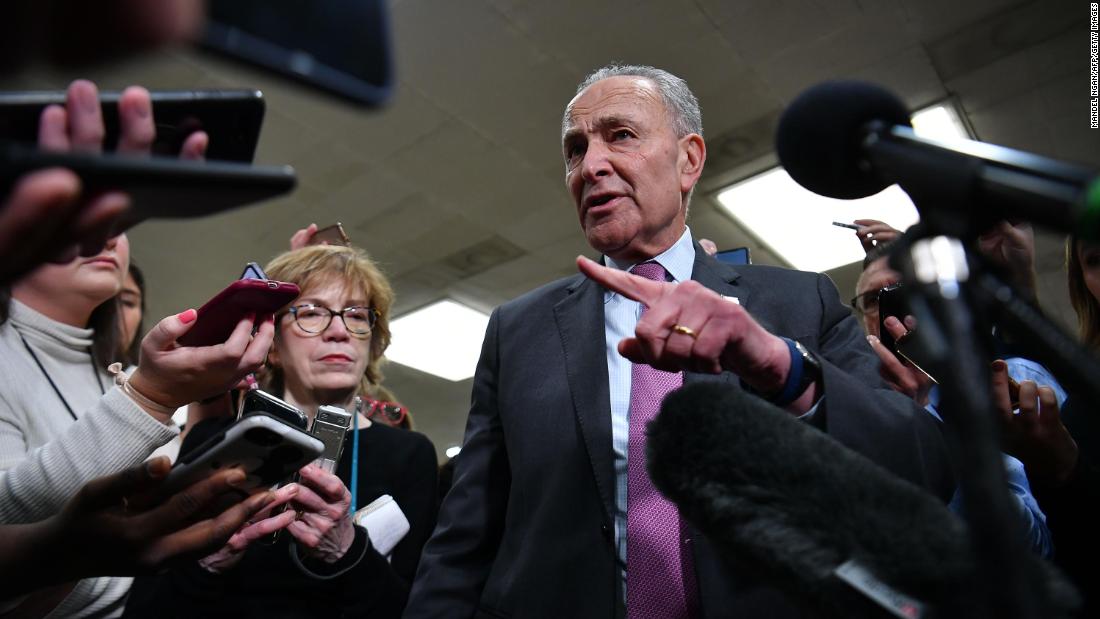 The comments come after Senate Majority Leader Mitch McConnell, a Kentucky Republican, told his conference earlier Tuesday that the votes to shut out witnesses aren’t there yet. But Senate Republicans are growing confident they can defeat a witness vote after weathering the fallout of revelations from former national security adviser John Bolton’s draft book manuscript that Trump had told him US security assistance to Ukraine was conditioned on investigations into Democrats, including the Bidens.
“There are 10 to 12 Republicans who have never said a bad word about witnesses or documents, who know in their hearts it’s the right thing to do. But they have to weigh that against the pressure, the twisting of arms, that Donald Trump and Mitch McConnell will put on them,” Schumer told CNN’s Erin Burnett on “OutFront.”

“So I think it’s up in the air right now,” the New York Democrat added. “Are we feeling better today than we did a few days ago? Absolutely.”

The Bolton developments jerked the conversation over witnesses in the Senate into a new direction. But several GOP senators and aides said the White House presentations on Monday had helped halt a potential scenario in which a handful Republicans moved sharply toward wanting to hear from witnesses.

After the defense team concluded its opening arguments Tuesday, Senate Republicans huddled in a senators-only meeting to discuss witnesses and the path forward. McConnell and several other Republicans warned that moving ahead with one witness could lead to a number of new witnesses — and there would be no clear path out of the trial, according to a source familiar with the remarks.

“The Bolton revelations are stark,” Schumer said. “And when Mr. Sekulow gets up and says one of the reasons you should vote to acquit is we don’t have any eyewitness accounts and at the same time the man he’s representing, Donald Trump, is preventing those eyewitnesses, they lose a lot of ground.”

The vote on whether to proceed to considering subpoenas for witnesses and documents will likely take place Friday or Saturday, Sen. John Thune, a South Dakota Republican, told CNN. Ahead of that, Schumer holds that things remain “up in the air.”

“Is there a chance that we might get a vote to allow witnesses and documents? Yes,” the minority leader said. “But is it also an uphill fight and I wouldn’t do any dances — joy dances — now? Yes, I would not.”