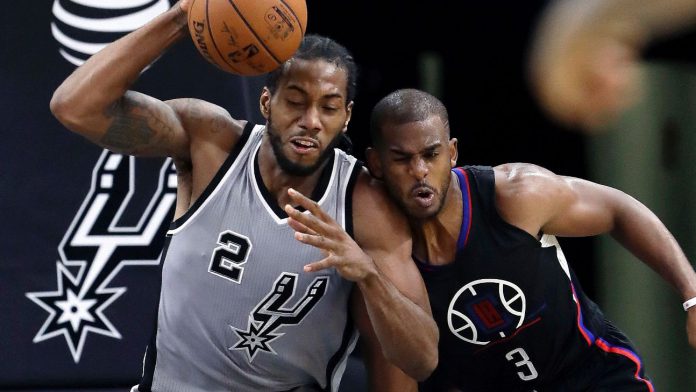 SAN ANTONIO — Excuses escaped slipping off tongues in the locker room when San Antonio’s players explained a 116-92 loss Saturday to the Los Angeles Clippers, the Spurs’ largest defeat in the 160-game history of the series between the teams.

“Awful game,” guard Manu Ginobili said. “They killed us in every aspect.”

The team’s early schedule served as an accomplice to murder, too, considering the Spurs played seven games over the first 12 nights to start their 2016-17 campaign, including four on the road: at Golden State, Sacramento, Miami and, just Friday night, Utah.

In fact, in just the first week of the season, Spurs coach Gregg Popovich rested LaMarcus Aldridge for the team’s 106-99 win over the Miami Heat on Oct. 30, a day after sitting Ginobili and point guard Tony Parker. Going all the way back through the first five games of each season since Popovich’s first full season as head coach (1997-98), there’s only been one real instance in which the coach sat a notable contributor so early, according to ESPN Stats & Information. On Nov. 6, 2014, Popovich rested Ginobili and Tim Duncan in just San Antonio’s fourth outing of the year. The result: a 98-81 loss at Houston.

Popovich explained last week that the decision to rest Aldridge and Parker so early in the season stemmed from both players experiencing minor knee soreness. Parker is expected to miss another week as he lets the pain in his right knee subside.

Starting guard Danny Green hasn’t even yet made his 2016-17 debut due to a quadriceps strain aggravated a week before the Oct. 25 opener at Golden State.

So Popovich expects this upcoming four-day break in the action to do the Spurs some good before Wednesday night, when they host the Rockets.

The Spurs also need to figure out a way to start much faster at home. Led by Blake Griffin, who poured in a game-high 28 points, including 26 before intermission, the Clippers reeled off 73 first-half points. Los Angeles’ first-half output ranked as the most scored in the first half against the Spurs in the Popovich era.

“Blake was great, but their whole team beat us soundly, embarrassingly,” Popovich said. “They were terrific.”

San Antonio started out that way, at least, scoring the first eight points of the game before falling behind 17 points in the first quarter on a Griffin step-back jumper with 2 minutes, 3 seconds remaining to make the score 32-15.

“The fact of it is we’ve had a couple of slow starts at home, and the first team has to be responsible to set the tone early and not let this happen,” said center Pau Gasol, who contributed 11 points and four rebounds. “You can say fatigue may kick in during the fourth quarter when there’s six minutes left. But you start out the game and we have to come out more aggressive, and be more accountable and responsible for stronger starts, especially on our home court.”

Added Ginobili: “When they give you 20 points like that, on a game where you’re coming from a long trip like that, it’s hard to find that type of energy to overcome a 20-point deficit. We made too many mistakes in the first half.”

Los Angeles carried a 73-55 lead into intermission, outscoring the Spurs 26-10 in the paint in addition to netting 21 points off nine San Antonio turnovers. The Spurs, meanwhile, managed to force only one turnover for two points.

Despite the slow start, San Antonio managed to pull to within six points in the second quarter on a Jonathon Simmons dunk. But that was as close as the home team would get.

San Antonio didn’t match the 73 points the Clippers rolled up in the first half until the 11:15 mark of the final quarter, when Nicolas Laprovittola drove to hit a layup that made the score 91-74.

Still, the Spurs refuse to point to fatigue as a factor. After all, the Clippers were playing their fifth game of the week, including the past two on the road.

“We were coming off a back-to-back. But so were they, so don’t want to blame it on that,” forward/center David Lee said. “We’re aware of the number of games and the amount of travel we’ve had. But we’re NBA players and need to find a way through that. We just didn’t execute at either end with a level of crispness that we did last night in Utah to get a tough road win. We weren’t as sharp tonight as we could have been.”

San Antonio racked up a 40-1 record on its home court last season on the way to capturing a franchise-record 67 victories. The Spurs have already dropped two in a row at the AT&T Center, which marks the first time since December 2014 the team lost two in a row at home during the regular season.

“You always want to win for your home crowd, but a loss is a loss,” said Spurs forward Kawhi Leonard, who chipped in 14 points on 3-of-13 shooting to go with six rebounds. “We feel like we gave two away. But we’ve just got to learn from our mistakes.”

Leonard said that after a loss such as Saturday’s, “for sure, you want to play” immediately to bounce back. But given the current state of the Spurs, Leonard, like Popovich, would be happy just to get a few days off before embarking on the next part of the schedule, which will include four outings in six nights; luckily for San Antonio, three of those are at home.

“It’s good to have these rest days and get our bodies healthy,” Leonard said. “We’ll be prepared for Wednesday.”

How each Top 25 team wins next year's national title

Game, set, another match for Djokovic and Federer