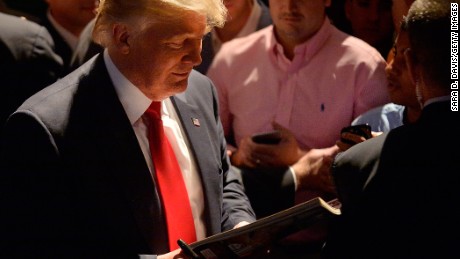 Trump’s campaign has been unconventional since the get-go — which has resulted in a number of standout magazine and tabloid newspaper covers. Here are some of the most memorable so far:

Machado, now a US citizen, has become an outspoken advocate for Democratic presidential nominee Hillary Clinton.

Time magazine’s cover features a dripping Trump with a single-word headline: “Meltdown.”
The story featured in the magazine breaks down all of the missteps of Trump’s campaign in the weeks after the Republican National Convention.

On Friday, The New Yorker unveiled their new cover, which is an illustration of a larger-than-life Trump, with the backdrop of New York City, being rained upon and catching drops in his hand.
“Like a lot of anxious people, I’ve been obsessively watching all the forecasts, predictions, and computer models, hoping for a break in this feverish political season,” Barry Blitt, the illustrator, told The New Yorker. “It’s finally looking like we may be getting some blessed relief.”

The cover for the new issue is the fifth featuring Trump since he announced he was running for president.

The New York Daily News’ cover story called on Trump to end his controversial campaign for the White House. The headline said, “This isn’t a joke anymore.”

The sub headline said, “When Trump hinted gun-rights supporters shoot Hillary, he went from offensive to reckless. He must end his campaign. If he doesn’t, the GOP needs to abandon him.”

Mad magazine got in on the Trump covers for August, featuring an illustration that shows the Mad mascot Alfred E. Neuman coming out of Trump’s head on the cover.

Mad, a satirical magazine, has poked fun at politicians for more than 60 years.

“Many people have wondered if Trump has any intelligent ideas in his head,” John Ficarra, Mad’s editor-in-chief, told The Huffington Post. “Our cover answers that question once and for all.”

This cover of The New Yorker, titled “Grand Illusion,” features an illustration of Trump as a magician sawing the symbol of the Republican Party, an elephant, in half.

“This is the fourth time in less than a year that I’ve drawn Trump (or his hands),” Blitt, the cover’s illustrator, told The New Yorker at the time. “It seems like a lot, but the Trump-induced rift in the GOP is the least depressing of the items on the current news cycle.”

The cover came a day after Trump met with House Speaker Paul Ryan and other Republicans at Capitol Hill to work on uniting the party.

This issue of Time Magazine features a serious portrait Trump with five check mark boxes. Four of them, labeled “bully,” “showman,” “party crasher,” and “demagogue” are checked off. The last box — which says “the 4th President of the United States” — is not checked.

The story is an interview by David Von Drehle aboard Trump’s private plane.

Despite the cover’s message about the Republican nominee, Trump was happy to be on the cover.

“Look at that picture of me on Time,” he said to a People magazine reporter. People reported that as Trump spoke, he was motioning to a stack of the magazines in his office. “It’s a movement! Isn’t that an amazing picture? It’s been a lot of fun.”

Trump grabbed headlines after he made a reference to the size of his penis during a Republican presidential debate.

“Look at those hands, are they small hands?” Trump said during the debate, raising them for viewers to see. “And, he referred to my hands — ‘if they’re small, something else must be small.’ I guarantee you there’s no problem. I guarantee.”

In this issue of The Rolling Stone, Matt Taibbi documents the experience of being on the trail with Trump. The cover features an illustration of Trump holding a pitchfork and running while Texas Sen. Ted Cruz, holding a burning stick, and Ohio Gov. John Kasich clutching a stick with a nail through it, run behind him.
The headline of the cover is “Trump Unbound.”

Pope Francis said on February 18 that Trump “is not Christian” if he calls for the deportation of undocumented immigrants and pledges to build a wall between the United States and Mexico.

“A person who thinks only about building walls, wherever they may be, and not building bridges, is not Christian. This is not the gospel,” the Pope told journalists who asked his opinion on Trump’s proposals to halt illegal immigration.

The New York Daily News led their coverage of the event with this image of Trump edited with flames around his face and the title “Anti Christ.”

Conservative magazine The National Review denounced Trump early in the primaries with a strong message from its editors.
The editorial labeled Trump a threat to conservatism, as well as essays by 22 conservative thinkers from various ideological factions opposing Trump’s candidacy. It didn’t work. He won the nomination.

This cover is the newspaper’s response to Trump winning the New Hampshire primary in February. Trump collected a little more than 100,000 votes from Republican voters in the state, or 35.3% of the vote.

A photo of Trump is edited to show him as a clown, with clown face paint edited on a photo of him smiling and the headline, “Dawn of the Brain Dead.”

The sub headline says, “Clown comes back to life with N.H. win as mindless zombies turn out in droves.”

This Canadian magazine did a play on the “For Dummies” franchise by headlining this issue “Donald Trump for dummies” and taking a page out of the design of the books.

The article looks into Trump’s unprecedented rise as — at the time — the possible Republican nominee.

A February issue of The New Yorker features an illustration that depicts Trump speaking at one of his rallies while some of the most revered and iconic past American presidents, including George Washington, Abraham Lincoln and John F. Kennedy watch in horror.

“In most historical portraits, presidents are noble and dignified,” Blitt told The New Yorker about the cover of the issue. “My biggest challenge was to alter the presidents’ expressions to make them reflect attitudes of consternation.”

He added, “Teddy Roosevelt generally looks angry and somewhat appalled, so he was the easiest.”

In August 2015, as Trump surged into contention for the Republican nomination, he posed with a bald eagle for a Time cover story when he was being considered as Person of the Year.

Although Trump was not picked for the cover of Time, the shoot resulted in a viral GIF that circulated after Time released the video of the photo session in December (which is why this is included in this list).

“This bird is seriously dangerous, but beautiful,” Trump said in the video.

After Trump first proposed the idea of banning Muslims from entering the United States until we find out “what the hell is going on” in the Muslim communities, there was an outpouring of criticism for the Republican candidate.

In this issue of the Philadelphia Inquirer, the newspaper titled its headline story “The New Furor” with the sub headline, “Trump’s latest hair-raising idea? Keep out all Muslims.”

VALORANT tips and tricks from the pros

Sports Gerald Ravindran - May 31, 2020
0
Whether you're about to play VALORANT for the first time or you were part of the closed beta, it's always good to learn a...