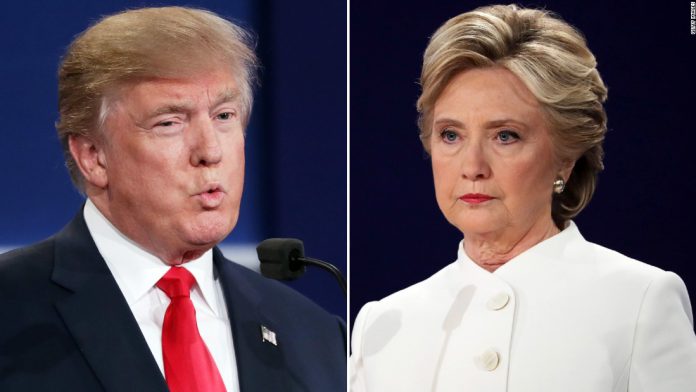 The team of reporters, researchers and editors across CNN is listening throughout the debate and selecting key statements from both candidates, rating them true; mostly true; true, but misleading; false; or it’s complicated.

Trump called out the Supreme Court justice for her criticism of his candidacy.

“Something happened recently where Justice Ginsburg made some very inappropriate statements toward me and toward a tremendous number of people, many, many millions of people that I represent and she was forced to apologize,” he said. “And apologize she did. But these were statements that should never, ever have been made.”

Ginsburg called Trump a “faker” in a July 11 interview with CNN.

“He has no consistency about him. He says whatever comes into his head at the moment,” Ginsburg said. “He really has an ego … How has he gotten away with not turning over his tax returns? The press seems to be very gentle with him on that.”

“At first I thought it was funny,” she said. “To think that there’s a possibility that he could be president.”

Early that same week, Ginsburg also told The Associated Press that if Trump won the presidency, “I don’t want to think about that possibility, but if it should be, then everything is up for grabs.”

“On reflection, my recent remarks in response to press inquiries were ill-advised and I regret making them,” Ginsburg said in a statement. “Judges should avoid commenting on a candidate for public office. In the future, I will be more circumspect.”

Although Presidents Ronald Reagan and George H.W. Bush appointed justices who they believed would overrule the 1973 decision recognizing a woman’s constitutional right to choose an abortion, three of those appointees — Justices Sandra Day O’Connor, Anthony Kennedy and David Souter — famously voted to preserve the Roe decision in 1992.

Even if a President Trump were only to appoint “pro-life” justices, there is simply no way to ensure that any particular decision, including Roe, would be “automatically” overruled.