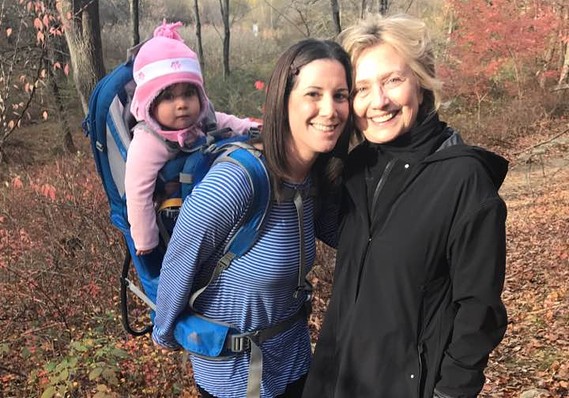 Sometimes when you’re feeling bummed out, it’s nice to get away and take a nice, quiet walk in the woods. And former presidential candidates are no exception.

A New York woman discovered that on Thursday, when she bumped into Hillary Clinton, who was walking her dogs with her husband, Bill, on a trail outside Chappaqua, N.Y. On Wednesday morning, the Democrat delivered her concession speech after a stunning loss to Republican Donald Trump on Tuesday.

Margot Gerster described the encounter in a Facebook post Thursday: “I’ve been feeling so heartbroken since yesterday’s election and decided what better way to relax than take my girls hiking. So I decided to take them to one of favorite places in Chappaqua. We were the only ones there and it was so beautiful and relaxing. As we were leaving, I heard a bit of rustling coming towards me and as I stepped into the clearing there she was, Hillary Clinton and Bill with their dogs doing exactly the same thing as I was.”

“I got to hug her and talk to her and tell her that one of my most proudest moments as a mother was taking Phoebe with me to vote for her. She hugged me and thanked me and we exchanged some sweet pleasantries and then I let them continue their walk. Now, I’m not one for signs but I think ill definitely take this one. So proud. #iamstillwithher #lovetrumpshate #keepfighting #lightfollowsdarkness”

The Clintons have lived in Chappaqua, in upstate New York, for about 17 years.

Gerster eventually removed the post from public viewing on Facebook, but not before it had racked up more than 12,000 likes and warmed the hearts of many.

Seeing that picture of @HillaryClinton meeting a supporter while walking her dog warms my heart. Maybe we were too harsh on her.

Seeing that picture of @HillaryClinton walking her dog today made me smile, but also brought me to tears AGAIN…