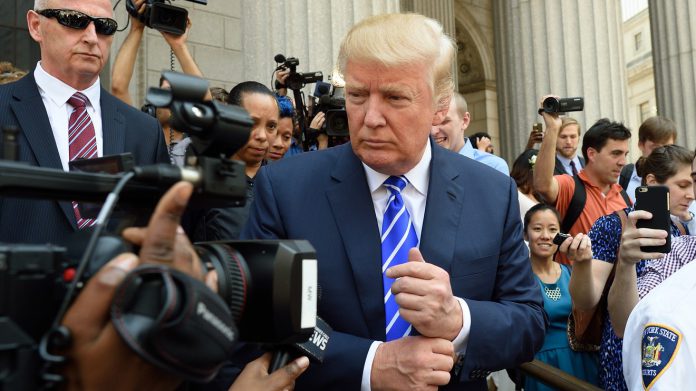 “We are in a big fat ugly bubble, and we better be careful,” declared Republican presidential nominee Donald Trump at the first of three debates with Democratic rival Hillary Clinton on Monday.

The statement was one of many zingers Trump lobbed as he attempted to cast the economy and the U.S. market as standing on a precarious footing. It is a charge that, in part, he hopes will serve as a rebuke to President Barack Obama’s presidency and indirectly to Clinton who served as U.S. Secretary of State.

At least one Wall Street economist agrees with Trump.

In an op-ed written in The Wall Street Journal late Wednesday Morgan Stanley chief economist, Ruchir Sharma, says, Trump’s bubblicious depiction of the state of equities isn’t off base, given the degree to which the Federal Reserve is propping up stocks by maintaining ultralow interest rates in place. Sharma says about 60% of the gains from the stock market since dovish monetary policy was enacted in the wake of the 2008 financial crisis can be attributed to central-bank support. Sharma puts it like this:

Sharma says that stocks, instead of being a reflection of the vitality of the economy, are a gauge of the Fed’s ability to jawbone markets higher, hold interest rates in check and/or rollout policies that are conducive to a continued march higher. “A sign of dysfunction” is how the Morgan Stanley economist puts it.

Here’s how Trump characterized it during his debate remarks on Monday: “The only thing that looks good now is the stock market but If you raise interest rates even a little bit that is going to come crashing down.” Trump was likely referring to the S&P 500 index SPX, +0.53% and the Dow Jones Industrial Average DJIA, +0.61% which are trading above their historical price-to-earnings ratio—a common measure of valuations.

For example, S&P 500 stock values based on a measure of P/E compiled by the Case-Shiller over the past nearly 10 years shows that stocks are at their priciest since about 2007, with a P/E of 27.07 (as the following chart shows):

Of course the debate wasn’t the first time Trump has claimed stocks are inflated because of the Fed. And the billionaire nominee isn’t the only one claiming that values are heady: Droves of market pundits including permabear Marc Faber have said stocks are pricey.

But there are also those who don’t see much reason to declare the markets overvalued and likely to unravel as a result. Recent research by respective data provider Ned Davis Research indicates that bubble talk is overblown as the following tweet shows:

Prominent investor Howard Marks, who runs Oaktree Capital, thinks investors should pump the brakes a bit but doesn’t see a bubble forming, as MarketWatch’s Need to Know column points out.

Marks offers this advice: “We are not traders. We are long-term investors, and if we can buy the debt of a company that we are convinced will pay off—at an attractive yield, given the risk—we’re going to buy it and hold it.” Although he’s referencing debt markets, where investors have been racing to get yield, that philosophy can be applied broadly to how investors could approach markets over the long haul.

Chief Justice John Roberts gave everyone something to call a win

The Point: The Supreme Court just shut the door on seeing Trump's taxes before the election

Sports Gerald Ravindran - July 9, 2020
0
The ACC will delay the start of competition for all fall sports until at least Sept. 1, the league announced Thursday. The move, which...