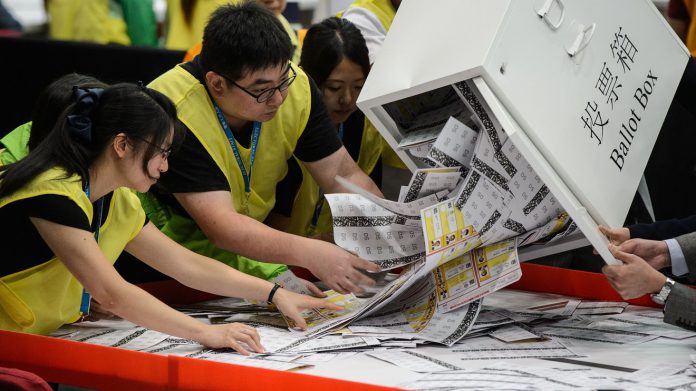 HONG KONG — A bevy of candidates from new parties calling for more self-determination for the former British colony appear to have won seats in the first major elections since the massive street protests of two years ago — a result that underscores deepening political divisions here.

Early results of a Sunday poll to elect a fresh slate of lawmakers for Hong Kong’s 70-member Legislative Council showed likely wins by a student leader from the 2014 Occupy protests — where thousands of citizens seeking greater autonomy blocked streets for 79 days — as well as other advocates of a more independently governed Hong Kong. The results followed record turnout of 58% of registered voters, as long lines of residents jammed the polls, some waiting until 2 a.m. to cast their ballots.

The possible wins by these parties could show their ideas have gained traction in the territory, as well as heighten tensions with the mainland, which has labeled such groups — particularly those advocating independence from China — dangerous secessionists. The government barred several candidates calling for Hong Kong’s complete independence from China from running in the election.

One of the new parties, Demosisto, is pushing for political autonomy from mainland China. The party’s chairman, Nathan Law, a 23-year-old college student who was a main leader of the Occupy protests appears to have won a seat, according to early results. He would become the youngest lawmaker ever to serve in the Legislative Council.

An expanded version of this report appears on WSJ.com.

Why 4 a.m. is the most productive hour.