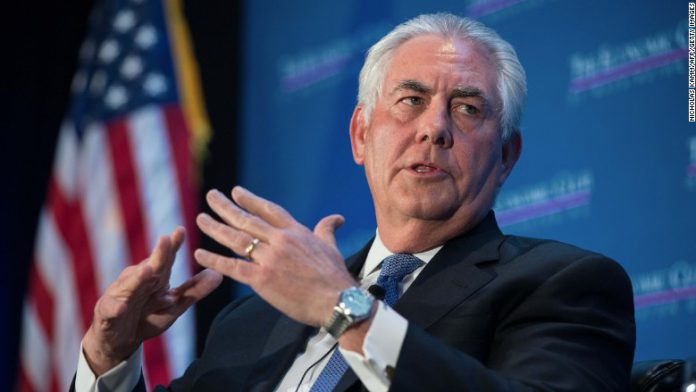 During Tillerson’s decade in charge, ExxonMobil (XOM) was more focused on pumping oil in far-flung places like Russia and the deepwaters off Africa to see the revolutionary U.S. shale oil boom that was happening right at home. In the process, Exxon didn’t embrace one of the biggest influxes of energy jobs that the country has ever seen.

“Exxon missed out on shale. They dismissed it, didn’t take it seriously,” said Fadel Gheit, a veteran energy analyst who covers Exxon at Oppenheimer.

Tillerson, who is leaving after a decade in charge, has admitted Exxon was late to the shale party.

“What’s gone on here in North America, has been, I think, nothing short of extraordinary. And I would be less than honest if I were to say to you we saw it all coming, because we did not, quite frankly,” Tillerson said in a June 2012 speech at the Council on Foreign Relations.

Tillerson said Exxon “grossly underestimated” the amount of shale oil in the U.S. and new technology’s ability to affordably pump it. In many ways, ExxonMobil (XOM) CEO’s legacy is tainted by his failure to believe in the American energy revolution.

All of this means Exxon did not fully participate in the oil jobs boom either. Goldman Sachs has estimated that the shale oil and gas revolution created roughly 233,000 jobs between mid-2009 and late 2014.

It stands to reason that by missing out on shale and focusing overseas, Exxon did more hiring in foreign countries like Nigeria, Russia, Canada and Kazakhstan than in the Bakken oilfields of North Dakota or deep in Texas.

That’s another irony given Trump’s shaming of Ford (F), Carrier (UTX), and other U.S. companies for shipping jobs overseas.

In a statement, Exxon noted that it is the largest U.S. producer of natural gas and has invested billions of dollars along the Gulf Coast.

“These investments will not only expand refining and chemical manufacturing capacity, but also bring economic growth and create jobs,” Exxon said.

Exxon said that Gulf Coast investments such as an expansion of its Beaumont polyethylene plant could create more than 28,000 temporary construction jobs and more than 1,200 permanent jobs over the next few years.

“America’s incredible energy potential remains untapped. It’s a wound that is totally self-inflicted,” Trump said in a May speech. “Imagine a world in which our foes, and the oil cartels, can no longer use energy as a weapon.” Trump blamed President Obama for keeping America “dependent on others.”

Tillerson seems to have a different view here. The Exxon man said in his 2012 speech that some fears about energy security are “not well-founded in fact.” As long as it’s reliable, Tillerson said “where it comes from should be of little consequence to us.”

To be fair, Exxon and Tillerson aren’t alone in missing the shale boom. Saudi Arabia and OPEC were also caught badly off guard by the explosion of American oil and more recently by how resilient U.S. frackers have become.

Exxon did eventually get into shale, but at a heavy cost. Exxon paid $41 billion in 2010 to acquire XTO Energy, a major natural gas producer that today also pumps lots of shale oil from Texas and North Dakota.

However, even Tillerson later admitted the XTO deal was poorly timed because it occurred just after natural gas prices peaked and they’ve never recovered.

Chevron (CVX) was also slow to hop on the shale train. However, analysts say Chevron has made more inroads with shale than Exxon since then.

The problem for oil giants like Exxon and Chevron is they are so gigantic that it would take a ton of fracking to really move the needle. So they focused on hitting the jackpot by finding a large overseas discovery rather than setting up hundreds of wells in U.S. shale fields.

Sign up for CNNMoney’s morning market newsletter: Before The Bell

Of course, U.S. production skyrocketed from a mere 4 million barrels per day in September 2005 to a peak of 9.6 million in April 2015, making it one of the world’s top energy producing nations.

Instead, Exxon ceded the shale game to more nimble players such as EOG Resources (EOG) and Continental Resources (CLR), which is run by vocal Trump supporter Harold Hamm.

Because they saw the writing on the wall early, those pioneers are generating far bigger production gains today than Exxon — and virtually all of it is coming from shale.

“They were the first movers so they were able to snap up strong acreage at better pricing,” said Stewart Glickman, energy analyst at CFRA Research.

“The large companies like Exxon have been playing catchup.”