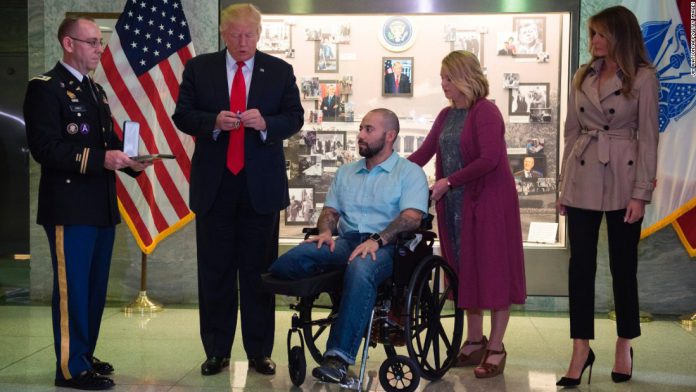 Trump presented the medal to Sgt. 1st Class Alvaro Barrientos and thanked him on behalf of himself and the first lady. Barrientos’ wife, Tammy, was present for the short ceremony.

“So I heard about this, I wanted to do this myself,” Trump said as he placed the Purple Heart on the soldier’s lapel. “Congratulations on behalf of Melania and myself and the entire nation. Tremendous, tremendous job, congratulations.”

The Purple Heart is awarded to American service members who are wounded or killed in combat. Barrientos was recently injured while serving in Afghanistan.

Many on social media noted that the President’s congratulations seemed inappropriate. It is not the first time Trump has faced backlash for remarks about the Purple Heart. At a rally in Ashburn, Virginia, in August 2016, the then-Republican presidential nominee said he was given a medal by a veteran backstage.
“I always wanted to get the Purple Heart. This was much easier,” Trump said. The comments were denounced as disrespectful to veterans. Trump has also received scrutiny over student and health deferments that kept him out of serving in Vietnam.

This was Trump’s first time at the military medical center. Prior to his visit, he tweeted that he was “looking forward to seeing our bravest and greatest Americans.” Vice President Mike Pence visited Walter Reed earlier this month.

The visit comes as the President refocuses on veteran’s issues in the White House, a campaign trail refrain he echoed many times. Last week he signed a bill to expand veteran’s health care options beyond the Veterans Administration system, which has been mired in backlogs and long wait times.

The President also plans to hold a press conference next Thursday on veterans’ issues specifically.

Things have changed for Venezuela. But they're not what Juan Guaido hoped for