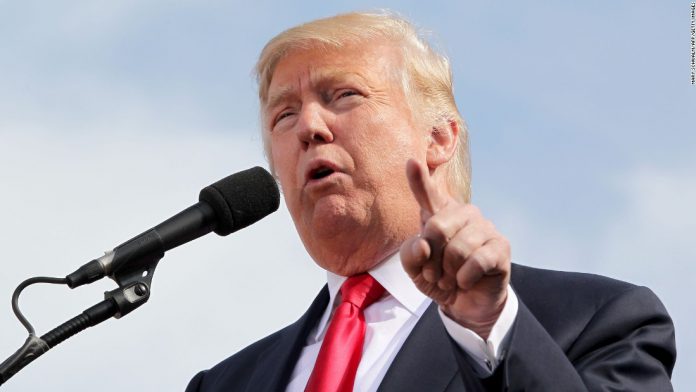 The Republican nominee, looking to refocus his campaign by highlighting his “outsider” candidacy, said he would work to amend the US Constitution to impose congressional term limits, an oft-mentioned proposal that has never succeeded.

“If I am elected President, I will push for a constitutional amendment to impose term limits on all members of Congress,” Trump said at a campaign rally here. “Decades of failure in Washington and decades of special interest dealing must and will come to an end.”

Trump called for limiting House members to six years of service, and senators to 12 years during his second rally later Tuesday, the equivalent of three and two terms, respectively.

The real estate mogul argued the proposal was necessary “so that we can have a government that works again and can function properly.”

“It is time to drain the damn swamp!” Trump said during a rally in Grand Junction, Colorado.

Trump said in August said in North Carolina that he would “take a very serious look” at the idea of imposing term limits on members of Congress. And last month, he said in New Hampshire that while he was “absolutely OK with term limits,” he argued, “to me, it is not the most important thing.”

“Someone does not do the job, you vote them out, but I am absolutely OK with term limits,” he said during a rally in Laconia, New Hampshire.

Trump’s push for congressional term limits on Tuesday came a day after the Republican nominee called for imposing restrictions on members of Congress and executive branch officials transitioning into positions lobbying the federal government.

“Together we are going to deliver real change that puts Americans first,” Trump said here on Tuesday.

Trump’s new focus on governmental reforms comes as he is sliding in a slew of national and battleground state polls following two weeks of damaging disclosures about his treatment of women — first an audio recording of Trump bragging about groping women, and then nearly a dozen allegations from women who said Trump groped or kissed them without their consent.

Trump also continued to hammer Hillary Clinton over hacked emails WikiLeaks has published in the last week and decried “corruption” in Washington after an FBI report on Monday revealed that officials at the two departments allegedly sought to bargain over declassifying an email on Clinton’s server.

But while Trump on Tuesday again pointed to the “package of ethics reforms,” he began calling for a day earlier, the Republican nominee did not avoid straying from that message and spent time lambasting the media and even complaining about polls.

“Even though we’re doing pretty well in the polls, I don’t believe the polls anymore,” Trump said, issuing a surprising statement given the amount of time Trump has spent at rallies reading off poll numbers.

But that was when he was winning.