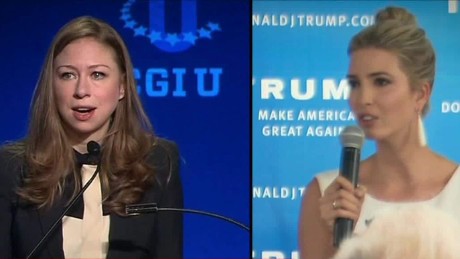 Trump led off with an appearance alongside her father for a speech Tuesday night on child care policy that she helped craft. She followed that up with an interview Wednesday on “CBS This Morning” during which she blasted Hillary Clinton’s record on child care and responded to questions about potential conflicts of interest for a Trump administration due to his international business dealings.
Asked by CBS’ Norah O’Donnell what the Trump family would do to prevent those potential conflicts, Ivanka explained that “as a private business, we can make decisions that are not in our best interest.”

“There’s something so much bigger than our business at stake and that’s the future of this country,” she said. “We can say, you know what, we’ll do less deals and not going to do that deal even though it’s a fine deal and economically reasonable, because it could create a conflict of interest. And we’ll act incredibly responsibly, and my father already said he would put it into a blind trust and it would be run by us.”

And Ivanka responded to Clinton’s criticism that the child care policy was insufficient by saying that Clinton has “certainly had an opportunity” to do better over her time in government.

“We have not been in public office for the last several decades and she has. So she could have instituted some of those policies in that role and has not done so,” she said.

Meanwhile, Chelsea Clinton has begun campaigning in earnest while her mom recovers from a pnuemonia diagnosis. She attended the opening of a new campaign office in Durham, North Carolina, on Tuesday, and spoke to an audience about education policy during a roundtable discussion in Raleigh early Wednesday.

The former first daughter slipped in a dig against Trump while discussing her mother’s education plan, arguing that Hillary Clinton “is the only person that has a plan on college and higher education affordability.”

She also spotlighted the Clinton campaign’s proposal to make community college tuition-free and public colleges or universities “debt-free,” and outlined policies to strengthen education in science, technology, engineering and math.

“When I graduated from Stanford, about one in five of the college graduates in the STEM fields in that year, in 2001, were women. And now we’re less than 15%. So we’re losing ground. So if you want to stop that trajectory, we know we need to make investments early and consistently throughout the education pipeline,” she said. “We not only need more STEM teachers, we need to empower STEM teachers to teach, so they are equally encouraging of girls and boys. It’s one of the reasons why my mom has committed to hiring 50,000 more STEM teachers.”

After the roundtable, Clinton is scheduled to appear at a campaign rally in another battleground state, Virginia, on Wednesday afternoon.

Ivanka and Chelsea were famously friendly before the 2016 election, and have maintained that the heated contest between their parents won’t end that relationship. Appearing on ABC’s “The View” last week, Chelsea said that the two “were friends long before this election.”

“We will be friends long after this election. Our friendship didn’t start in politics, and it certainly is not going to end because of politics,” she said.

'I have never seen him eat a vegetable:' Trump braces for a beef-free menu in India