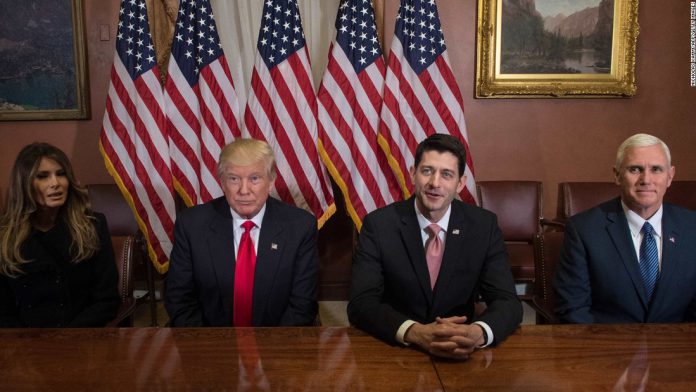 Now, he’s putting his differences behind them and embraced the President-elect at a midday meeting on Capitol Hill to chart out plans to help him enact a sweeping conservative agenda.

Trump, Ryan, Vice President-elect Mike Pence and future First Lady Melania Trump ate lunch at the Capitol Hill Club and then headed to the speaker’s office for a meeting. Ryan rolled out the red carpet for Trump, taking him out to his balcony in his Capitol office, which overlooks the Washington Monument, and the platform under construction where Trump will be sworn in as the 45th president. Ryan also pointed out Trump’s new hotel which recently opened and was visible from the balcony.

Sitting at a conference table flanked by Pence and Melania Trump, Ryan described “a fantastic, productive meeting.” He told reporters he and the President-elect discussed how “we’re going to hit the ground running” and then, borrowing a phrase from Trump, said they would “make America great again.”

Donald Trump talked about his eagerness to join forces with the speaker to begin implementing new policies.

“We can’t get started fast enough. And whether its health care or immigration, so many different things, we will be working on them very rapidly,” Trump said.

The sitdown came at a crucial time for both men. Trump started his day at a historic handoff meeting with President Barack Obama at the White House, preparing to take the reins and roll back some of the signature accomplishments put in place after eight years of a Democrat holding the highest office.
Ryan is still under fire from fellow Republicans for his decision not to defend the his party’s presidential nominee after leaked video tapes surfaced showing Trump making graphic comments about women. Even before that he broke with Trump on several occasions. Ryan faces a vote next Tuesday to keep his job as speaker and appears in good position to keep his gavel. But an enthusiastic vote of confidence from the President-elect could help smooth over ill feelings within the party and ward off any potential protest vote against him.

Pence is a friend and former colleague from his time serving in the House as representative from Indiana. The meeting was the first face-to-face get-together since the Republican National Convention in Cleveland, although the speaker noted Wednesday he spoke twice with Trump since he was declared the winner.

After the brief Capitol tour with the speaker, Trump and Pence walked across the Capitol for a meeting with Senate Majority Leader Mitch McConnell, who, despite tough challenges in races across the country, held onto the GOP majority in the upper chamber.

McConnell said they went over the transition and “issues that we obviously agree on” and called it “a first-class meeting.”

A day earlier at his post-election press conference, McConnell split with the incoming president, saying he didn’t plan to move to enact term limits and disagreed with Trump’s criticism of NATO.

The speaker, just like most everyone else in official Washington, was surprised by the reality star turned candidate’s upset Tuesday, but was quick to give him credit for tapping into a sentiment other politicians didn’t appear to grasp.

“Donald Trump heard a voice out in this country that no one else heard. He connected with — he connected in ways with people no one else did. He turned politics on its head and now Donald Trump will lead a unified Republican government,” Ryan said Wednesday at a news conference in his Wisconsin home town.

Ryan also said Trump helped GOP candidates across the country get elected and declared he “earned a mandate.”

Along with the presidential victory, Republicans maintained their control over both chambers in Congress.

While Trump didn’t lay out many specific policy details during his campaign, Ryan worked diligently on a platform, dubbed “A Better Way,” for the GOP nominee to use. It includes major plans to overhaul the tax code, repeal and replace Obamacare, scale back government regulations, address poverty and strengthen the military.

CNN’s Manu Raju and Jim Acosta contributed to this report.