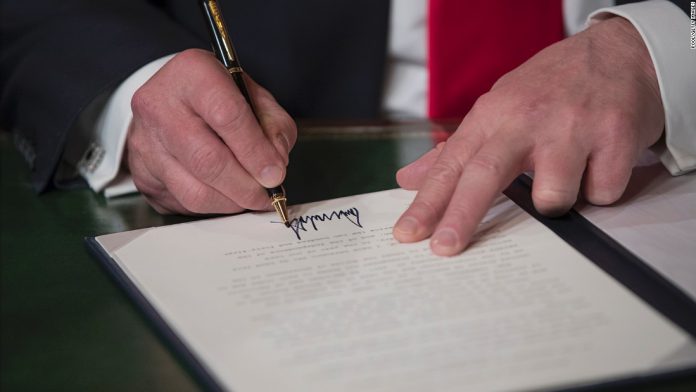 When he signs executive orders, Trump is using a Century II black lacquer and gold roller ball pen, made by manufacturer A. T. Cross. The Trump White House put in an initial order for 150 of the pens.

Trump, Obama and Bush use the medium felt tip refills — Bush in blue, Obama and Trump in black. Cynthia Patnode, a spokeswoman for Cross, told CNN the felt tip refill is “extremely quick to dry and can write on most surfaces.”

The Century II in black lacquer is available for purchase for the general public with an MSRP of $110 for the rollerball pen, plus the $6.50 felt tip refill.

Cross sells the pen to the White House through a distributor in the Washington area, per Patnode. The distributor gets a discount, paying less than $50 per pen, although it was not immediately clear how much they charge the White House.

A spokeswoman for the White House declined a request for comment.

Traditionally, these pens are handed out as souvenirs to guests attending the bill signings, and Trump has used the pen for each order he’s signed thus far, often holding up the paper to show off his signature.

Trump’s pen first made its mark moments after the inauguration ceremony when he headed inside the Capitol to sign some bills for his Cabinet nominees alongside family members and Hill leadership.

“Yeah, I’d like to give some pens out. The government is getting stingy, right?” the newly sworn-in President said, a stack of Cross pens before him.

The congressional leaders were picky about their pens, and Trump worked to accommodate everyone.

When he tried to pass off a pen to Senate Minority Leader Chuck Schumer that was used for a bill regarding Housing and Urban Development Secretary nominee Ben Carson, Schumer groaned, prompting a laugh from House Speaker Paul Ryan and Minority Leader Nancy Pelosi. Schumer also emphatically stated he didn’t want the Education Department nominee Betsy DeVos pen, “No, thank you.”

Pelosi later got her own pen from the Health and Human Services nominee Tom Price bill.

“Come here, I’ll give you Elaine. Do you want Elaine?” Trump asked Pelosi.

“You know what, the leader should have Elaine,” the President said.

Schumer later made a pen trade, swapping Carson at HUD, for the Department of Veterans Affairs nominee David Shulkin.

“No no, you’re only getting the one,” Trump said, later adding, “I think we’re going to need some more pens, by the way.”