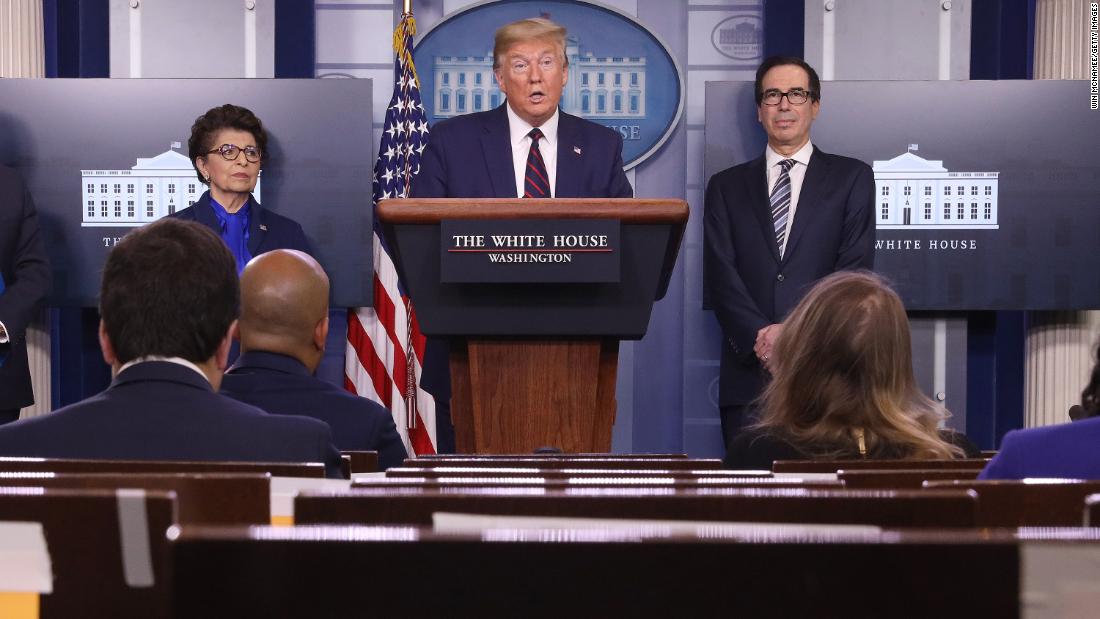 Trump’s continued support for a GOP lawsuit to dismantle Obamacare, with no replacement proposal in sight, is added fodder for Democrats making the case that current crisis is inextricably tied to pre-existing failures. Those holes in the system will be felt more acutely by millions of Americans over the coming weeks and months, as they lose jobs — and the coverage attached to them.

Many of them will find that the safety net is fraying or nonexistent — in large part due to the actions, over a decade, of Republican officials. Some 14 states, all with either Republican governors or GOP-controlled state legislatures, have yet to take advantage of the Affordable Care Act provision expanding Medicaid to low-income adults, though at least two were reconsidering that stance prior to the pandemic.

Obamacare back in the spotlight

The administration has also rejected calls to reopen enrollment on the Obamacare federal exchanges and allow uninsured Americans an opportunity to obtain coverage. The deadline to sign up for a 2020 policy was December 15 in most states. But advocates, insurers, Democrats and at least two Republican governors were hoping that, with hundreds of thousands already ill and the federal government taking extraordinary steps to aid a spiraling economy, the White House might relent.

At a briefing this week, Trump and Vice President Mike Pence were asked to explain the administration’s “rationale” for not creating a special enrollment period.

Pence spoke for more than two minutes, touting some insurers’ decisions to waive co-payments on Covid-19 tests and treatment, before pivoting to the government’s mitigation efforts and a vague promise to help the afflicted “deal” with any subsequent financial crunch.

“I think it’s one of the greatest answers I’ve ever heard, because Mike was able to speak for five minutes and not even touch your question,” Trump said, applauding Pence’s evasiveness.

“It’s time for the federal government to just step up and say, ‘We’re going to cover everyone who doesn’t have health insurance,” Warren said.

Trump has been clear when questioned about his support for the lawsuit to end Obamacare, which the Supreme Court is expected to take up next term. During a coronavirus task force briefing at the White House on March 22, he rejected any suggestion that he would back off it in light of the growing public health and economic crises.

“We are running the bad health care (system) much better than it was ever run and we’re making it better, but it could be much better than it is,” Trump said of Obamacare, though his administration has yet to release a replacement plan. “And so what we want to do is terminate it.”

Democrats who organized to defend the law in 2017, and used the GOP’s attempts to gut the law against it a year later, have already begun to pivot in an effort to connect the issue with the administration’s coronavirus response.

“It’s hard to imagine anything worse during the spread of a virus than taking away health care if people get sick. Republicans have never had a way of justifying their plans that take away health care but now that costs are, sadly, more real,” Jesse Ferguson, a Democratic strategist, told CNN on Friday.

Meanwhile, Protect Our Care, a group founded by a former Obama administration health official, has emerged from that fight as a leading liberal watchdog and rapid response group dedicated to tracking Republican attacks on Obamacare and other public health services. It has rebranded its newsletter as the “Coronavirus War Room.”

A repeat winner for Democrats?

Polling continues to show Democrats, up and down the ballot, with an advantage over Republicans on health care, which is now guaranteed to remain a point of sharp contention, likely at or near the top of voters’ concerns, as the general election approaches this fall.

The intensity of concern over the issue — and its potential to drive up enthusiasm among Democrats later this year — was evident even before the coronavirus effectively paused the primary campaign.

Health care was top of mind for voters in the Democratic primaries held in February and March, outranking income inequality, race relations and climate by a wide margin in exit polls in most states.
Health was also the top issue for Democratic, independent and swing voters, according to a Kaiser Family Foundation poll from mid-February. For Republican voters, health care came lower down the list — beaten out by the economy, immigration and foreign policy/national security.

For voters overall, 26% said health care was the most important issue in deciding their vote for president, narrowly beating the economy, at 23%. Concerns over the two are likely to overlap as the death toll from the coronavirus rises alongside jobless numbers.

Meanwhile, the Affordable Care Act hit its highest favorability rating in the nearly 10 years that Kaiser has tracked opinions. Some 55% of the public viewed the law favorably and 37% held unfavorable views, the poll found.

“The President must change course and allow open enrollment in the Affordable Care Act, as even Republican governors have called on him to do,” Biden said in a statement. “He should also drop his support for a lawsuit that would undo the ACA, because it would cost almost 20 million Americans their care — the last thing we should pursue during a public health emergency.”

In the absence of federal action to broaden coverage, the initiative has shifted to governors and other local leaders.

Eleven states that run their own Obamacare exchanges, along with the District of Columbia, have launched temporary special enrollment periods so their uninsured residents can obtain coverage outside the usual time frame. And while those who lose their job-based coverage are able to sign up for Obamacare policies, the President’s action would have eliminated some paperwork requirements for those already facing major life changes amid the pandemic.

Though a handful of Republican governors, like Ohio’s Mike DeWine and Maryland’s Larry Hogan, have taken steps to mitigate the spread of the virus that the President repeatedly downplayed early on, the GOP’s position on how Americans should pay for coverage is largely unchanged from 2017 — when their push to end Obamacare fell short amid a broad public backlash.
The future of the US health care system has dominated the 2020 Democratic primary, with moderate candidates pushing for the expansion of Obamacare and, in Biden’s case, the opening of a public option to compete with private insurers, potentially driving down costs to individuals while covering millions more.

But Democrats have been divided about how far to push reforms. The party’s left flank, led by Sen. Bernie Sanders, is pushing for “Medicare for All,” a program that would guarantee coverage to every American — a promise, as Sanders’ campaign has reminded voters over the last few weeks, that could have helped slow the initial spread of the coronavirus.

Despite their differing scopes of their ambitions, Democratic leaders are broadly pushing in the same direction: toward expanding coverage through proactive public policy measures.

That same pledge was the key to the party’s sweeping victories in the 2018 midterms.

Nancy Pelosi, who has won and lost her House speakerships amid squalls over Obamacare, pointed to the issue in the aftermath of that election.

Sports Gerald Ravindran - June 4, 2020
0
Major League Baseball has rejected the players' offer for a 114-game regular season with no additional salary cuts and told the union it did...

Nanox, maker of a low-cost scanning service to replace X-rays, expands Series B to...

World Gerald Ravindran - June 4, 2020
0
A lot of the attention in medical technology today has been focused on tools and innovations that might help the world better fight the...

Sports Gerald Ravindran - June 4, 2020
0
As we approach the one-year anniversary of the United States' victory in the 2019 FIFA Women's World Cup -- its second straight and fourth...