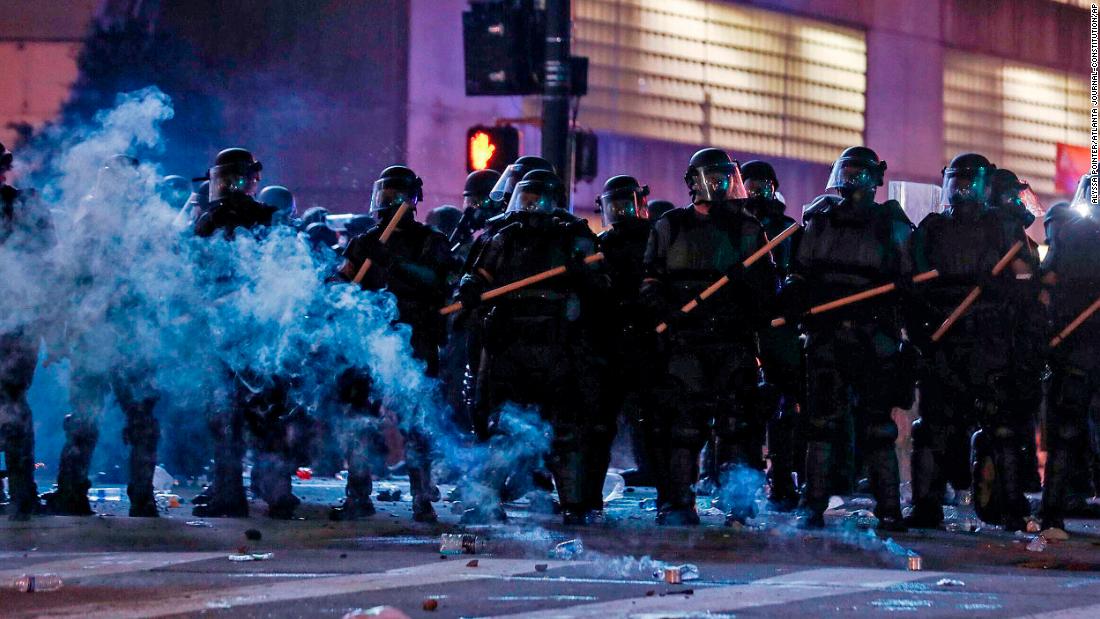 Although interference in this way may be happening, federal and local officials have yet to provide evidence to the public.

Local and federal officials are still trying to quantify how significant a role the outside groups are playing in the unrest that has spread to cities all over the US. Officials are scrambling to identify the affiliations of the extremists taking part in the riots, property destruction and attacks on police, and allegations of foreign influence stoking the unrest online are being actively tracked.

“I certainly think I want to believe it is outside more and that might go to the problem that we have of saying ‘it can’t be Minnesotans’,” Walz said at a Sunday morning press conference. “I know there are outside folks in there whether they are the predominance or whether leading or not.” But the catalyst, he said, was the murder of George Floyd and that was “our problem.”

“Saying there are outside forces is not to deflect and pretend we don’t have that,” Walz said.

The President and his top officials have blamed far-left extremists for the violence. Trump tweeted Sunday that the United States would designate Antifa, which is short for anti-fascists, as a terrorist organization, and Attorney General William Barr also singled out the group in a statement denouncing the violence as domestic terrorism, announcing federal law enforcement would use its network of Joint Terrorism Task Forces to apprehend and charge those taking part in the violent confrontations.

The US government has no existing legal authority to label a wholly domestic group in the manner it currently designates foreign terrorist organizations.

While Trump and Barr have focused on Antifa, the FBI and other agencies are tracking groups from both the extremist right and left involved in the riots and attacks on police.

Federal law enforcement officials tell CNN they are aware of organized groups who are seeking to carry out the property destruction and violence, using the cover of the legitimate protests in Minneapolis and elsewhere. Those domestic extremist groups include anarchists, anti-government groups often associated with far-right extremists and white supremacy causes, and far-left extremists who identify with anti-fascist ideology.

In the past, some of the groups have been known to organize and travel specifically to confront police and destroy property, according to federal law enforcement officials, who say they’ve seen a similar pattern in Minneapolis and other cities where protests have turned violent in recent days.

Antifa describes a broad group of people whose political beliefs lean toward the left — often the far left. Antifa positions can be hard to define, but many members support oppressed populations and protest the amassing of wealth by corporations and elites. Some employ radical or militant tactics to get out their messages.

The FBI and other federal agencies are working with local authorities to track social media posts and other communications to identify those who have crossed state lines to carry out violence. Federal officials say they believe there is an amalgam of groups showing up in protests from the extremist left and right that normally oppose each other but see common cause in attacking the police and the government.

The Trump administration’s message has focused only on the far-left extremists. Barr’s statement referred to violence from “antifa and other similar groups.” On CNN’s “State of the Union” on Sunday, national security adviser Robert O’Brien said, “These Antifa groups are organized and use Molotov cocktails and fireworks and gas to burn down our cities.”

Asked by CNN’s Jake Tapper about far-right groups participating in the violence, O’Brien said: “I haven’t seen the reports on far-right groups. This is being driven by Antifa.”

Trump has also blamed Democratic officials in Minnesota and other states where violence has occurred. “Get tough Democrat Mayors and Governors. These people are ANARCHISTS. Call in our National Guard NOW,” Trump tweeted Sunday.

Acting Senate Intelligence Chairman Marco Rubio, a Florida Republican, said Saturday that the outsiders included “a rogues gallery of terrorists from Antifa to ‘Boogaloo’ groups encouraging and committing violence.” Boogaloo is a group often associated with far-right extremist ideology that wants to initiate a civil war. Rubio tweeted that the groups were not “ideologically compatible but share a hatred of govt & police & are taking advantage of the protests.”

“Many of these professional agitators don’t fit a simple left vs right identity,” Rubio said. “They are part of a growing anti-government extremist movement. They hate law enforcement & want to tear the whole system down even if it requires a new civil war.”

What local officials are saying

Minnesota officials said this weekend white supremacists and others were mixing in with legitimate protestors. Authorities there are looking at connections between those arrested and white supremacist organizers who have posted online about coming to Minnesota. Officials have also tracked messages about seeking to loot and whether there was a connection to organized crime.

At a news conference on Sunday morning, Minneapolis Public Safety Commissioner John Harrington said that one-fifth of the weekend arrests to date were from outside the state. Among those arrested Saturday were residents of Arkansas, Kansas City, Iowa, Illinois and Michigan, Harrington said, though he did not have arrest data from overnight.

Walz also said the state was looking at who was behind a “very sophisticated” denial of service attack on all state computers that was executed on Saturday. “That’s not somebody sitting in their basement, that’s pretty sophisticated,” he said.

Officials across the country are also assessing the make-up of the agitators mixed in with legitimate protestors.

Denver Mayor Michael Hancock told CNN’s Wolf Blitzer on Sunday he “wouldn’t be surprised if Antifa” was behind some of the actions in his city. “We don’t have the specific information they’re directly engaged, but we have intel, we have watched and intercepted, frankly, groups coming into Denver. We have confiscated weapons, including assault weapons, that were heading to the demonstrations.”

Salt Lake City Mayor Erin Mendenhall said the city too is trying to determine the role of those behind the violence, telling CNN, “We have yet to unpack of the arrests we made who the instigators are and their locations. We’re anxious to find out.”

In Chicago, Mayor Lori Lightfoot said looters organized across the city and possibly came in from outside: “There clearly was coordination, they were clearly listening to our radio traffic,” she said. “The number of U-Haul trucks that magically showed up in front of stores, car caravans that dropped people off and broke windows, and then were hustling the goods out into the backs of the cars. Absolutely, it was organized — there’s no question whatsoever about that.”

Philadelphia Mayor Jim Kenney on Sunday denounced what he called “anarchists” for the looting and vandalism that occurred Saturday night in his city and claimed rhetoric from the White House was “perpetuating” the violence.

In New York, investigators are also searching social media to identify leaders who are trying to get protestors to gather to incite violence, a law enforcement official told CNN. Investigators there have seen antagonizers more affiliated with Antifa and far-left causes, and not necessarily white supremacist groups. “They do not represent the peaceful New Yorkers that want to protest,” the official said.

Allegations of foreign influence attempting to influence and stoke the disruption in the US have quickly followed the violence coming out of the protests. O’Brien pointed to Chinese social media messages gloating about the chaos. On ABC’s “This Week,” he also acknowledged some Russian activists and mentioned Zimbabwe and Iran.

But the role and effectiveness of foreign actors is hard to measure — some suggest their role is additive, not initiating any unrest.

Rubio may have been basing some of his information on analysis from Graphika, a company that helped the committee with its report on Russia’s social media influence during the 2016 elections. Graphika CEO John Kelly sent information to Senate Intelligence Committee leadership on Saturday, which was obtained by CNN.

“Yes, we are seeing very active engagement with the issue from clusters of social accounts in the social media influence networks of Russia, Iran, and China,” Kelly said. “Our team is actively monitoring the situation now, including growing activity around the ‘Boogaloo’ movement, which is pushing for a ‘Second American Civil War.'”

CNN has reached out to Graphika for comment about what is behind their analysis.