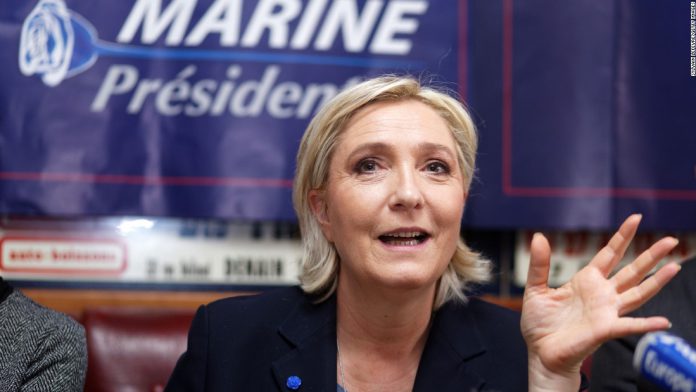 At 48, Marine Le Pen is a twice-divorced mother of three. She has regularly pleaded for the privacy of her children, seeking to protect them from the media spotlight.

Her relationship with her father, however, has been the subject of much media scrutiny.

A bomb explosion at the family’s Paris apartment when Marine was eight made her aware of her father’s notoriety. And after her parents’ divorce, she began spending more and more time at his office.

Her talent for public speaking led her to study law and then, in 1998, to a role as a legal adviser to her father’s party. As she rose through its ranks — becoming vice-president, a member of the European Parliament and then a member of parliament in France — she also tried to soften the party’s image. This led to tension with her outspoken father. And it wasn’t until she took over as president in 2011 that she was able to rebrand the party as fully as she wished. In 2013 though, Jean-Marie Le Pen repeated his claim that the Nazi gas chambers had been but a detail of history, leading to a very public falling out and to his expulsion from the party he’d created.

What does she stand for?

Le Pen shares her father’s core beliefs on immigration, which remain central to her platform. She wants to slash legal immigration from 200,000 to 10,000 “entries” per year in France, and also wants to see immigrants’ access to public services limited.

Marine Le Pen believes that only her particular brand of political isolationism and economic nationalism can protect France from the twin evils of “Anglo-Saxon multiculturalism” and politically correct liberalism. Economically, she’s a conservative who believes in protecting France’s workers and its large social safety net. She presents herself as the true champion of blue-collar France and has managed to win over the working-class voters who are worried by calls from both the left and right for the liberalization of France’s highly regulated labor market.

Le Pen is in favor of a return to the French franc currency and has promised a referendum on remaining in Europe — à la Brexit — if she is elected. She is also in favor of France’s withdrawal from NATO.

On a number of different issues, Le Pen’s positions mirror closely those of Donald Trump — and she believes that his victory in the American election will clear the way for her own in France.

Internationally, Le Pen wants closer ties with Russia and she’s been criticized for taking a loan from a Russian bank. In an interview with CNN last year, Le Pen said she was left with no choice after being turned down by French banks.

Why she could be France’s next president

National opinion polls indicate that Le Pen is leading the candidates ahead of the spring vote, with only the Republican, Francois Fillon, anywhere near her. But a growing controversy over the alleged payment of parliamentary funds to his wife for a no-show job threatens to damage Fillon’s campaign. And a fragmented political landscape will make it hard for any of the other candidates to stand up to her. Only Emmanuel Marcon, the former economy minister and independent candidate, has any realistic chance of getting a sufficient number of voters behind him.

For now, though, Marine Le Pen is the only candidate that pollsters say is certain of getting through to the second round of voting. Just as in 2002, the last time her party made it to the second round, she will face the “republican front” that will gather behind the opposing candidate in a determined effort to keep the National Front away from power. Until now, this strategy has proven effective, both nationally and regionally.

The party has, over the last few years, achieved high opinion poll ratings, but still struggled to win power. It controls only a dozen towns in France and at a regional level has been kept away from the top positions. But Le Pen believes that after the Brexit vote in the United Kingdom and Trump’s victory in the United States, the wave of populism might be strong enough to break through the barriers of the past and to take her all the way to the Élysée.