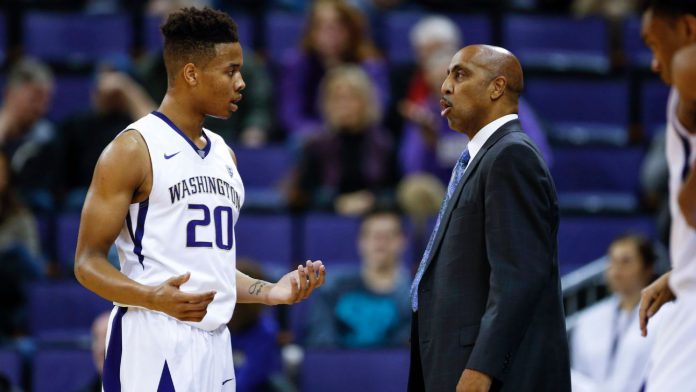 So the teams on this list still have some time to find themselves, forget the past and move forward.

Right now, however, they’ve reached a desperate state. Which teams should panic with conference season approaching?

Washington Huskies
Level of panic: You’re on a business trip 2,000 miles from home when your teenage son texts, “We have good homeowners insurance, right?”
They’re 4-5 right now after a four-game losing streak. This turbulent path and a Pac-12 schedule that begins with matchups against Oregon and Cal in two of its first three league games could terminate the team’s slim chances of rising and reaching the NCAA tournament. That’s an embarrassment for a program that’s led by freshman Markelle Fultz (22.8 PPG, 6.9 RPG, 6.1 APG), a potential No. 1 pick in next summer’s NBA draft. A statistical picture of the load Fultz currently carries: Per hooplens.com, the team shoots 71.5 percent from the free throw line when he’s on the court and just 51.7 percent from the free throw line when he’s not.

UConn Huskies
Level of panic: You feel a pop in your back as you try to show your kids a dance move from 20 years ago.
Well, where do we start? The American Athletic Conference’s coaches picked UConn (five votes) to finish second behind Cincinnati (six votes) in the league’s preseason poll. Perhaps the Huskies will launch a turnaround. They’re 4-5 now after Saturday’s four-point loss to Ohio State. That’s not a bad loss. But you have to wonder how a team that can’t shoot — 58.1 percent at the rim (228th in the country, per hoop-math.com), 61.4 percent on the free throw line (324th), 46 percent inside the arc (259th), 30.8 percent from the 3-point line (287th) — will find a way to beat enough respectable opponents to win its league and reach the NCAA tournament.

Georgetown Hoyas
Level of panic: Your 4-year-old smiles and tells you, “I washed your phone today because it was dirty.”
Here are the first four Big East games for a 6-4 Georgetown team that entered Thanksgiving at 2-4 before a slate of sub-100 games helped John Thompson III’s program move above .500: at Marquette, vs. Xavier, at Providence, vs Butler. Marquette is growing. Xavier is a second-weekend squad (likely more) and a Big East contender. A Providence squad with a top-30ish defense has lost just once since Nov. 17. And Butler just beat Cincy, the favorite in the American, by double digits. That gantlet could swallow a Georgetown squad ranked 43rd in the BPI.

Iowa State Cyclones
Level of panic: That guy you just pushed at the bar didn’t say, “I hate every team in the NFC.” He said, “I used to fight in the UFC.”
You have to judge every team on this list according to the reasonable expectations that surrounded the team prior to the season. Although the team lost Georges Niang and a fleet of talented seniors, Iowa State entered the year as a projected Big 12 contender — an idea strengthened by the return of Monte Morris, who excelled in summer showcases and elevated his stock as a future pro. Right now, Steve Prohm’s Cyclones are ranked 22nd on KenPom.com’s adjusted defensive efficiency list. Iowa State hasn’t finished with a top-25 defense since 2005 (10th). That’s improvement under Prohm. But the squad’s struggles right now are at the free throw line. A team that’s making just 63.1 percent of its free throws missed 9 of 19 combined free throw attempts in a pair of tight losses to Cincinnati (one point) and Gonzaga (two points). Plus, it’s not as fluid around the rim without Niang. Deonte Burton is a doing a great job of playing a hybrid forward position at just 6-foot-5, but teams are making life hard for him inside the arc, where he’s shooting 47.3 percent. The Cyclones missed fast-break layups in their loss to rival Iowa last week. They’re just not good enough to recover from the missed free throws and errant shots they’ve attempted in this sloppy stretch.

Iowa Hawkeyes
Level of panic: You’re at the game with your friends. You realize you forgot to do something important. Then your wife calls and asks, “Why is my mom still waiting for you at the airport?”
Yeah, the Hawkeyes beat rival Iowa State last week after Peter Jok turned Carver-Hawkeye Arena into his canvas and painted the floor with his 23-point output. But don’t let that honorable victory lead to any misguided assumptions. Go back to the loss to Nebraska-Omaha on Dec. 3 at Carver-Hawkeye. That squad registered 1.27 points per possession against Fran McCaffery’s squad. So even if you ignore losses to Virginia and Notre Dame, you have to ask how sluggish offenses at Memphis, Seton Hall and Nebraska-Omaha torched an Iowa defense that reminds Iowa fans of the poor units Todd Lickliter fielded in his final years in Iowa City. That’s a bad sign for any Big Ten team.

Florida Gators
Level of Panic: You’re a sports fan in Washington, D.C.
With 5:55 remaining in the first half of Florida State’s 83-78 victory over rival Florida on Sunday, Gators big man John Egbunu set a screen as Kasey Hill dribbled up the court. But the shifty guard drove to the opposite side of the floor as four Florida State defenders slid into the lane. The good news? Chris Chiozza and Keith Stone were both wide open to his right. But Hill did not pass. And his rushed shot clanked off the right side of the rim. Can you really blame him for not passing? Not when Chiozza (27.3 percent) and Stone (33.3 percent) are members of a Florida squad that missed 75 percent of its 3’s against FSU. Yes, the Gators have suffered all three of their losses this season to teams in the top 25. This is a good Florida team that can finish in the top tier of the SEC. But the limits of its offense — only three of its top nine players, according to usage, shoot above 50 percent inside the arc — could cause this solid Gators team to stumble throughout the season.

Rhode Island Rams
Level of panic: You told your boss you were home sick. The boss was going to a conference, you thought. Then you two see each other at the driving range in the middle of the day.
With the return of E.C. Matthews, after a year on the sideline following the season-ending knee injury he suffered in the first game of 2015-16, many expected Rhode Island to sizzle in 2016-17. But the Rams have not looked the part of a top-25 team and Atlantic 10 king in recent weeks. Part of Dan Hurley’s challenge involves his lineups. Matthews is a star who is averaging 15.4 PPG and 4.4 RPG. He scored 31 points in his team’s 82-77 loss to Houston on Saturday. But, per hoopslens.com, the Rams were significantly better on offense (1.12 PPP compared to 1.25 PPP) and defense (1.38 PPP allowed vs. 0.84 allowed) when Matthews wasn’t on the floor. Now, it’s not that simple. Houston’s best players may have been on the bench in the eight minutes Matthews didn’t play, but Hurley’s great challenge this season may involve creating the proper rotation to help this talented group regain its swagger and rhythm before conference play begins.

San Diego State Aztecs
Level of panic: You tell your buddies, “I’ll pick up the tab.” Then the owner hands you the bill and thanks you for sending her on a tropical vacation.
Steve Fisher’s squad entered the week on a three-game losing streak, prior to Monday’s home matchup against Alabama State. That roller coaster included losses to Loyola (Chicago), 115th in the BPI, Grand Canyon (237th) and Arizona State (157th). Yeah, it’s time to panic in San Diego. In two of those games, the Aztecs failed to top 64 points. As of Sunday, only two SDSU players had connected on more than 48 percent of their attempts inside the arc. The offensive challenges aren’t new for a Fisher squad, though. But he has organized a defense that’s finished in the top 10 of KenPom.com’s efficiency ratings for three consecutive years. SDSU is not among the top 50 right now. That’s odd. A mediocre offense and a defense that surrendered 76 points to Grand Canyon might be in trouble.

Is Scott Cross your team’s next coach?

UT-Arlington’s head coach signed an extension in March. But his alma mater might end the season in a battle with bigger schools to retain his services after his Mavericks secured a road win over then-No. 12 Saint Mary’s, the first top-25 win in the program’s history, last week. This Sun Belt standout now has wins over Saint Mary’s and Texas. Kevin Hervey (13.5 PPG) is back after last year’s ACL tear and the squad is rolling. Remember Cross’ name in the coming months as power conference schools with coaches on hot seats commence their transition plans. The 42-year-old who won 24 games last year might get a few phone calls.

When the Blue Devils star flew down the court against UNLV on Saturday and dunked on everyone in the arena, the Strip and the city, he scowled for a moment.

We all know Duke has a unique talent pool. That’s clear. But I think it’s also obvious that Duke possesses an edge last year’s squad lacked. Mike Krzyzewski’s squad has a roster full of guys who’ll challenge anyone, attack any team and rock rims to prove it.

In their Champions Classic loss to Kentucky in 2015-16, Duke seemed timid. That’s not this season’s Duke squad.

This team has that meet-me-outside braggadocio to complement its elite personnel. Kentucky’s 38-0 squad had that persona. Florida’s title teams in 2006 and 2007 had it. The Jay Williams-era Blue Devils of the early 2000s had it, too. It’s a brand of nastiness, an attitude that could help the program prevail in the ACC and the NCAA tournament.

The five or six NBA prospects will help, too.

How Kenin halted Gauff's run in Australian Open round of 16

Sports Gerald Ravindran - January 26, 2020
0
LOS ANGELES -- The League of Legends Championship Series swung back into action Saturday, and 10 franchises are taking aim to be North America's...

Sports Gerald Ravindran - January 26, 2020
0
PHILADELPHIA -- Years ago, it was LeBron James following Kobe Bryant by coming straight out of high school to the NBA. On Saturday, it...